Ready for some horror? This box invites you to dive into the backlist of Grady Hendrix, the New York Times best-selling author of The Southern Book Club’s Guide to Slaying Vampires.

This box includes the following books:

From the New York Times best-selling author of The Southern Book Club’s Guide to Slaying Vampires comes a hilarious and terrifying haunted house story in a thoroughly contemporary setting: a furniture superstore.

Something strange is happening at the Orsk furniture superstore in Cleveland, Ohio. Every morning, employees arrive to find broken Kjerring bookshelves, shattered Glans water goblets, and smashed Liripip wardrobes. Sales are down, security cameras reveal nothing, and store managers are panicking.

To unravel the mystery, three employees volunteer to work a nine-hour dusk-till-dawn shift. In the dead of the night, they’ll patrol the empty showroom floor, investigate strange sights and sounds, and encounter horrors that defy the imagination.

About My Best Friend’s Exorcism:

From the New York Times best-selling author of The Southern Book Club’s Guide to Slaying Vampires, this unholy hybrid of Beaches and The Exorcist blends teen angst and unspeakable horrors into a pulse-pounding supernatural thriller.

The year is 1988. High school sophomores Abby and Gretchen have been best friends since fourth grade. But after an evening of skinny-dipping goes disastrously wrong, Gretchen begins to act…different. She’s moody. She’s irritable. And bizarre incidents keep happening whenever she’s nearby. Abby’s investigation leads her to some startling discoveries—and by the time their story reaches its terrifying conclusion, the fate of Abby and Gretchen will be determined by a single question: Is their friendship powerful enough to beat the devil?

About We Sold Our Souls:

From the New York Times best-selling author of The Southern Book Club’s Guide to Slaying Vampires comes a hard-rocking, spine-tingling horror novel about a washed-up guitarist of a ’90s heavy metal band who embarks on an epic road-trip across America and deep into the web of a sinister conspiracy.

Every morning, Kris Pulaski wakes up in hell. In the 1990s she was lead guitarist of Dürt Würk, a heavy-metal band on the brink of breakout success until lead singer Terry Hunt embarked on a solo career and rocketed to stardom, leaving his bandmates to rot in obscurity.

Now Kris works as night manager of a Best Western; she’s tired, broke, and unhappy. Then one day everything changes—a shocking act of violence turns her life upside down, and she begins to suspect that Terry sabotaged more than just the band. Kris hits the road, hoping to reunite Dürt Würk and confront the man who ruined her life. Her journey will take her from the Pennsylvania rust belt to a celebrity rehab center to a satanic music festival. A furious power ballad about never giving up, We Sold Our Souls is an epic journey into the heart of a conspiracy-crazed, pill-popping, paranoid country that seems to have lost its very soul. 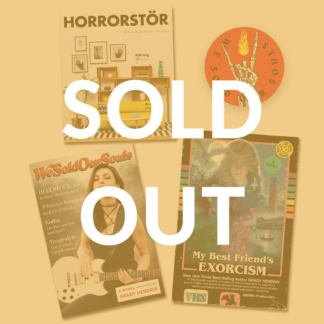 You're viewing: Grady Hendrix Starter Pack
$38.00 Out of stockAdd to Cart

Our Holiday Pop-Up Shop is closed for the season. Thank you for shopping with us! Dismiss