We Are Here Forever

It’s the most adorable apocalypse ever! The human race has vanished replaced by innocent, playful, creatures called the Puramus. In this hilarious and epic graphic novel, short interlocking stories follow the purple pals as they explore their new home, form a mini-monarchy, and develop a modern society on par with 21st-century humans. A final act pulls us across time and space in the search for clues to the origins of the Puramus. Along the way, humor and intrigue abound: Can King defend his village when nobody understands what war is? Will Jingle work up the nerve to read her poetry at open mic night? Will Puffpuff ever stop floating?

Based on the Tumblr comic, We Are Here Forever is for fans of post-apocalyptic sci fi blended with dry humor and undeniable adorableness. Colorful and cartoony art will have you rooting for these cute critters through their absurd adventures…but are they really as harmless as they seem?

Be the first to review “We Are Here Forever” Cancel reply 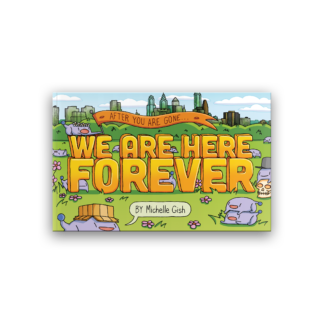 You're viewing: We Are Here Forever
$14.99 Select options